Below is the latest edition of Bayview - a free newspaper for Torbay residents from Torbay Liberal Democrats.

(A Plain text version can be found below the images) 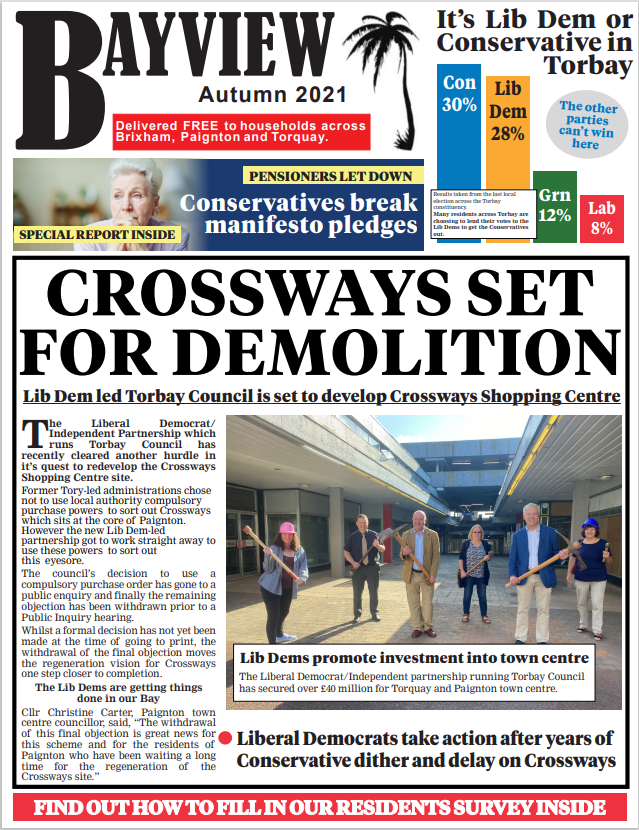 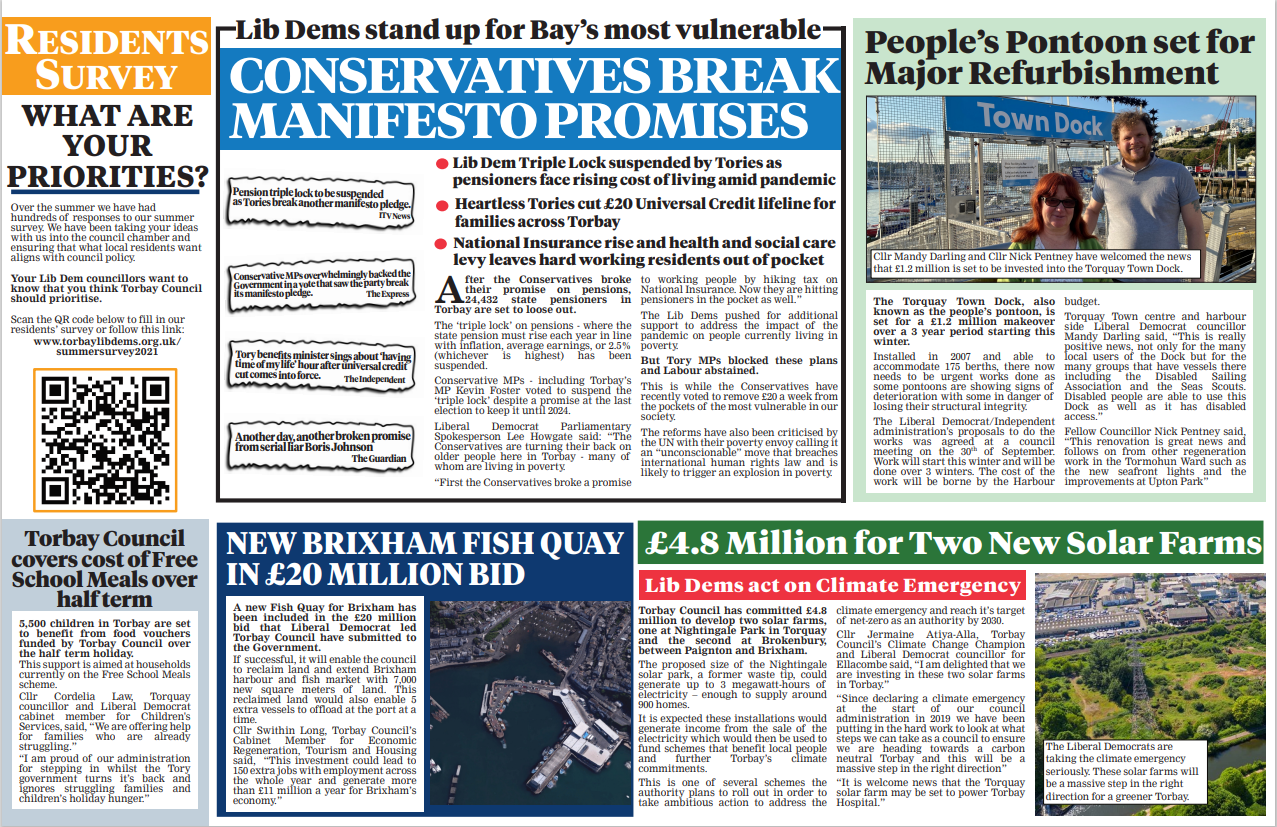 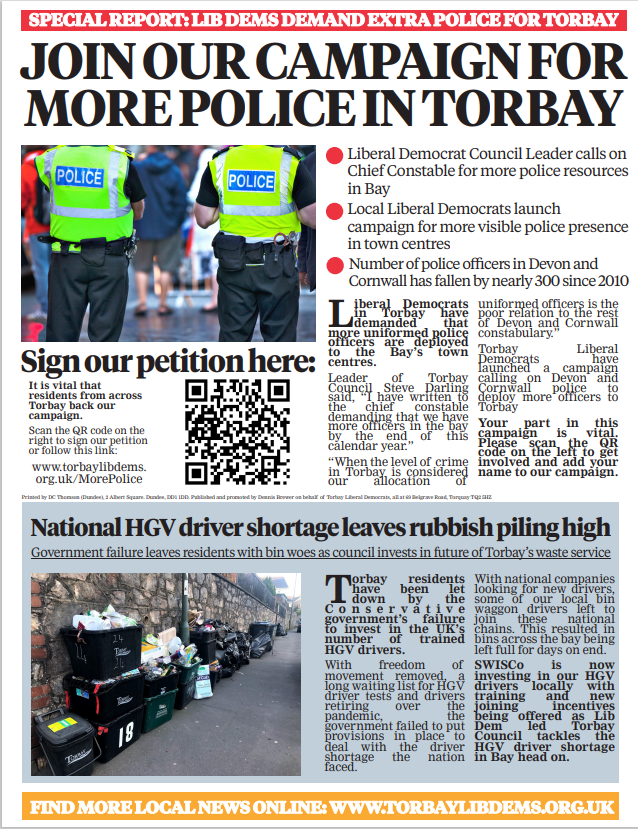 (Picture of councillors holding hammers and pick axes outside the near empty Crossways Shopping Centre.)

The Liberal Democrat/Independent Partnership which runs Torbay Council has recently cleared another hurdle in it’s quest to redevelop the Crossways
Shopping Centre site.
Former Tory-led administrations chose not to use local authority compulsory purchase powers to sort out Crossways which sits at the core of Paignton.
However the new Lib Dem-led partnership got to work straight away to use these powers to sort out this eyesore.
The council’s decision to use a compulsory purchase order has gone to a public enquiry and finally the remaining objection has been withdrawn prior to a Public Inquiry hearing. Whilst a formal decision has not yet been made at the time of going to print, the withdrawal of the final objection moves the regeneration vision for Crossways one step closer to completion.
The Lib Dems are getting things done in our Bay. Cllr Christine Carter, Paignton town centre councillor, said, “The withdrawal of this final objection is great news for this scheme and for the residents of Paignton who have been waiting a long time for the regeneration of the Crossways site.”

WHAT ARE YOUR PRIORITIES?

Over the summer we have had hundreds of responses to our summer survey. We have been taking your ideas with us into the council chamber and ensuring that what local residents want aligns with council policy.
Your Lib Dem councillors want to know that you think Torbay Council should prioritise.
Scan the QR code below to fill in our residents’ survey or follow this link:
www.torbaylibdems.org.uk/summersurvey2021

5,500 children in Torbay are set to benefit from food vouchers funded by Torbay Council over the half term holiday.
This support is aimed at households currently on the Free School Meals scheme.
Cllr Cordelia Law, Torquay councillor and Liberal Democrat cabinet member for Children's Services, said, “We are offering help for families who are already
struggling.”
“I am proud of our administration for stepping in whilst the Tory government turns it’s back and ignores struggling families and children’s holiday hunger.”

After the Conservatives broke their promise on pensions, 24,432 state pensioners in Torbay are set to loose out.
The ‘triple lock’ on pensions - where the state pension must rise each year in line with inflation, average earnings, or 2.5% (whichever is highest) has been
suspended.
Conservative MPs - including Torbay’s MP Kevin Foster voted to suspend the ‘triple lock’ despite a promise at the last election to keep it until 2024.
Liberal Democrat Parliamentary Spokesperson Lee Howgate said: “The Conservatives are turning their back on older people here in Torbay - many of whom are living in poverty.
“First the Conservatives broke a promise to working people by hiking tax on National Insurance. Now they are hitting pensioners in the pocket as well.”
The Lib Dems pushed for additional support to address the impact of the pandemic on people currently living in poverty.
But Tory MPs blocked these plans and Labour abstained.
This is while the Conservatives have recently voted to remove £20 a week from the pockets of the most vulnerable in our society.
The reforms have also been criticised by the UN with their poverty envoy calling it an “unconscionable” move that breaches international human rights law and is likely to trigger an explosion in poverty.

The Torquay Town Dock, also known as the people’s pontoon, is set for a £1.2 million makeover over a 3 year period starting this winter.
Installed in 2007 and able to accommodate 175 berths, there now needs to be urgent works done as some pontoons are showing signs of deterioration with some in danger of losing their structural integrity.
The Liberal Democrat/Independent administration's proposals to do the works was agreed at a council meeting on the 30th of September.
Work will start this winter and will be done over 3 winters. The cost of the work will be borne by the Harbour budget.
Torquay Town centre and harbour side Liberal Democrat councillor Mandy Darling said, “This is really positive news, not only for the many local users of the Dock but for the many groups that have vessels there including the Disabled Sailing Association and the Seas Scouts.
Disabled people are able to use this Dock as well as it has disabled access.”
Fellow Councillor Nick Pentney said, “This renovation is great news and follows on from other regeneration work in the Tormohun Ward such as the new seafront lights and the improvements at Upton Park”

Torbay Council has committed £4.8 million to develop two solar farms, one at Nightingale Park in Torquay and the second at Brokenbury, between Paignton and Brixham.
The proposed size of the Nightingale solar park, a former waste tip, could generate up to 3 megawatt-hours of electricity – enough to supply around 900 homes.
It is expected these installations would generate income from the sale of the electricity which would then be used to fund schemes that benefit local people and further Torbay’s climate commitments.
This is one of several schemes the authority plans to roll out in order to take ambitious action to address the climate emergency and reach it’s target of net-zero as an authority by 2030.
Cllr Jermaine Atiya-Alla, Torbay Council’s Climate Change Champion and Liberal Democrat councillor for Ellacombe said, “I am delighted that we are investing in these two solar farms in Torbay.”
“Since declaring a climate emergency at the start of our council administration in 2019 we have been putting in the hard work to look at what steps we can take as a council to ensure we are heading towards a carbon neutral Torbay and this will be a massive step in the right direction”
“It is welcome news that the Torquay solar farm may be set to power Torbay Hospital.”

A new Fish Quay for Brixham has been included in the £20 million bid that Liberal Democrat led Torbay Council have submitted to the Government.
If successful, it will enable the council to reclaim land and extend Brixham harbour and fish market with 7,000 new square meters of land. This
reclaimed land would also enable 5 extra vessels to offload at the port at a time.
Cllr Swithin Long, Torbay Council’s Cabinet Member for Economic Regeneration, Tourism and Housing said, “This investment could lead to 150 extra jobs with employment across the whole year and generate more than £11 million a year for Brixham’s economy.”

JOIN OUR CAMPAIGN FOR MORE POLICE IN TORBAY

Liberal Democrats in Torbay have demanded that more uniformed police officers are deployed to the Bay’s town centres.
Leader of Torbay Council Steve Darling said, “I have written to the chief constable demanding that we have more officers in the bay by the end of this calendar year.”
“When the level of crime in Torbay is considered our allocation of uniformed officers is the poor relation to the rest of Devon and Cornwall constabulary.”
Torbay Liberal Democrats have launched a campaign calling on Devon and Cornwall police to deploy more officers to Torbay.
Your part in this campaign is vital.
Please scan the QR code on the left to get involved and add your name to our campaign.

It is vital that residents from across Torbay back our campaign.
Scan the QR code on the right to sign our petition or follow this link: www.torbaylibdems.org.uk/MorePolice

Torbay residents have been let down by the Conservative government’s failure to invest in the UK’s number of trained HGV drivers.
With freedom of movement removed, a long waiting list for HGV driver tests and drivers retiring over the pandemic, the government failed to put provisions in place to deal with the driver shortage the nation faced.
With national companies looking for new drivers, some of our local bin waggon drivers left to join these national chains. This resulted in bins across the bay being left full for days on end.
SWISCo is now investing in our HGV drivers locally with training and new joining incentives being offered as Lib Dem led Torbay Council tackles the HGV driver shortage in Bay head on.