Residents in St Martin’s Court, Hele, Torquay, have contacted their local Liberal Democrat councillors as they are fed up with the large amount of rubbish that over months has collected behind the property. They highlight the fact that children play in this area and it is only a matter of time before a child is injured.

The Liberal Democrat councillor for the area, Mandy Darling, is set to ask a question at the next Full Council meeting on the 19th October 2017.

Cllr Mandy Darling said: “The community have been proactive in trying to get the fly-tipping removed. The problem seems to be that this area is a “no-mans-land” with no one claiming responsibility for ownership.” She went on to say: “Residents should not have to see this eyesore when they look out of their windows, they should not live in fear of being overrun with rats.”

Fellow councillor Nick Pentney added: “Residents are on tenterhooks, worried that a child is going to be hurt amongst the debris just outside their windows. It is time the Council stopped buck-passing and got the contractors to remove this fly-tipping eyesore.”

A Local resident, Mrs Price, said,:“We are all really concerned about the children's safety. It is only a matter of time before someone gets injured.” She went on to say: “I have seen rats in the rubbish and I fear they will come into our homes.”

The question Cllr Darling will be asking is:-

Fly-tipping has been collecting over the summer at the rear of St Martin’s Court accessed by Corfe Crescent, Hele, Torquay. This rubbish is a health hazard, encourages rats and is a danger to children playing in the area. It is also unsightly and encourages further fly tipping.

Over many months the local community have been trying to ascertain a way forward to getting this area cleared but with little effect. Westward Housing say that it is not their land, Sanctuary disclaims responsibility and the Council have confirmed that the land behind St Martin’s Court is not in their ownership and not their responsibility.

The local community in the area are extremely concerned and unhappy about this situation but the Council seems to be unwilling to establish a way forward. This situation canot go on. It is only a matter of time before a child is injured or we have rats entering properties.

Please can this Council provide a way forward in order to resolve this situation and clear this festering eyesore? 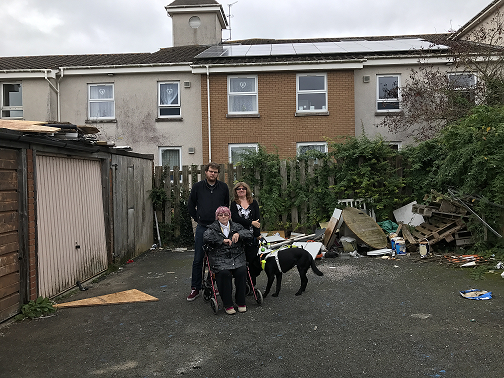